The Federal government in the early hours of Wednesday (today) has instructed the National Youth Service Corps (NYSC) management to shut down all the orientation camp nationwide over the spread of coronavirus.

The directive, which came from the NYSC headquarters in Abuja early Wednesday morning disrupted the orientation camp of the 2020 Batch A Stream 1, across the 37 centres in the country. 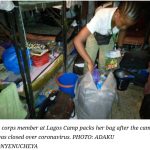 The Lagos State NYSC Coordinator, Eddy Megwa, told corps members during morning meditation on the parade ground to leave the orientation camp as soon as possible.

“We have been asked to close down all orientation camps and discharged the corps members to their various places of primary assignment,” Megwa said.

He said the abrupt ending of the camp was part of preventive measures taken by NYSC against the spread of deadly coronavirus in the country.

The virus has killed over 7000 persons globally while three cases of the virus have been confirmed in Nigeria.

Megwa told corps members that the directive was passed to all the state coordinators early this morning to indefinitely shut down all orientation camps across the country.

“All corps members should avoid travelling, getting free rides from strangers, which could be detrimental to your lives,” Megwa told the corps members.

“You are expected to go back to your different residential address pending the time when all dust will be settled over this coronavirus.

“I want to believe it is to avert anything that could endanger the lives of the corps members and the staff of NYSC.”

NYSC had on Thursday 12 March performed the swearing-in ceremony for the 2020 Batch A, Stream 1 corps members, who came into the orientation camps on Tuesday 10 and were expected to leave on March 30.

The Stream 2 corps members were expected to resume camp on April 2.

All corps members would receive their transport allowance and letters for their places of primary assignment, as well as their identity cards before leaving the orientation camps.

They have also been told to report to their Local governments today.

Upon hearing the news the corps members jubilated, as they won’t be subjected to the military drills, which a lot of them dread.

Read full story on the Guardian

side effects of ginger, garlic turmeric and cloves combo drink

Side effects and benefits of Predator Energy Drink

Health Benefits and Side Effects of Fearless Energy Drink